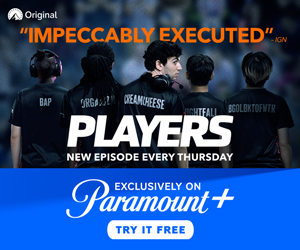 Players is now streaming on Paramount+!

share close
2 email
Players is a hit!
“Hilarious and captivating” – IGN
“Spectacular” – Paste Magazine
“Riveting storytelling” – Polygon
“An Instant Classic” – IndieWire
The new original series follows Team Fugitive, a League of Legends esports team known as “the bad boys of gaming”. Can leader Creamcheese and rookie phenom Organizm put aside their differences for the success of the team?
Dive into the world of esports with Players, now streaming exclusively on Paramount+. Try it FREE!

YO! MTV Raps is back with brand-new episodes!

YO! MTV Raps is back with brand-new episodes! Brand-new episodes of YO! MTV Raps are now streaming! The original YO! MTV Raps introduced a growing underground genre of music called rap in 1988. It was the first time fans could see their favorite rappers on screen, learn where they came from and how that influenced their lyrics, style, and values. Over 30 years later, hip hop is a dominating global force, influencing fashion trends, […]

Bloomingdales Back to School

LISTEN WITH YOUR APP